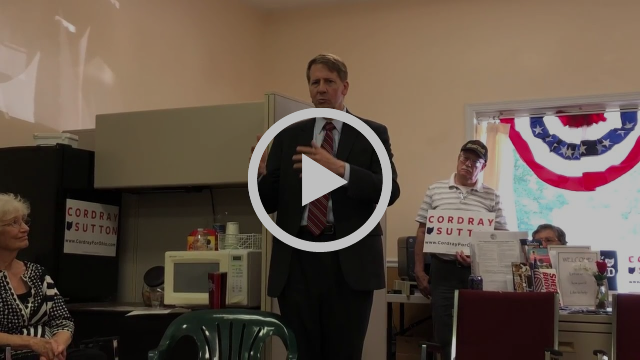 For the second time this week, Ohio Democrat gubernatorial candidate Richard Cordray has been caught on video comparing Republicans to Nazis.

New video shows Cordray at a campaign event from earlier this month stating that the tone being set by the White House is “like Nazi Germany,” comparing the President of the United States and the White House to Nazis and the Holocaust.

Just days ago, The Cincinnati Enquirer wrote about a separate video showing Cordray equating local Republicans who refused to oppose Governor John Kasich’s policies to those who “collaborated with the Nazis.” Cordray has thus far refused to apologize for those comments.

After criticizing his opponents for using “ugly” rhetoric during the Ohio primaries, it’s Cordray who has now been caught twice in one week shamefully comparing Republicans to Nazis. Cordray continues to show a stunning lack of judgement by making a habit out of equating those he disagrees with politically to Nazis.

It’s time for Cordray to take responsibility for his actions and apologize for his offensive remarks.

“Another incident has arisen from earlier this month of Richard Cordray making a comparison between Republicans and those who committed atrocities during the Holocaust.

The comments from Cordray, the Democratic gubernatorial nominee in Ohio, came while speaking to supporters during a campaign stop on June 15 with the Licking County Democrats in Newark, Ohio.

‘I will say, that as I said, the tone that you set in government and leadership matters,’ Cordray said. ‘I mean, right now we have a tone being set by the White House, which is absolutely against everything I’ve understood for America. You know, trying to find people to scapegoat and blame? That’s like Nazi Germany.’

‘I mean, I don’t want to make too strong a point about it, and I don’t want to compare it to the Holocaust, but it is trying to find people that we can knock down and drag down and blame and say, ‘it’s their fault, not our fault,’’ Cordray said. ‘That never builds people up, to knock somebody else down. When our kids do it on the playground, we tell them, ‘stop that.’’

Cordray had previously compared Ohio Republicans to officials from Vichy France, who collaborated with the Nazis during World War II. After the ‘Vichy Republicans’ comments were made public Monday, a spokesperson for Cordray said he ‘regrets’ having made the ‘inappropriate comparison.’ It’s clear, however, that the comparison was not an anomaly for the Democratic candidate.

Cordray, the former director of the Consumer Financial Protection Bureau, is running against Ohio Attorney General Mike DeWine to succeed Gov. John Kasich (R.), who is ineligible for reelection because of term limits. Cordray has received strong support from outside Ohio, including from Sen. Elizabeth Warren (D., Mass.), who helped create the CFPB.”