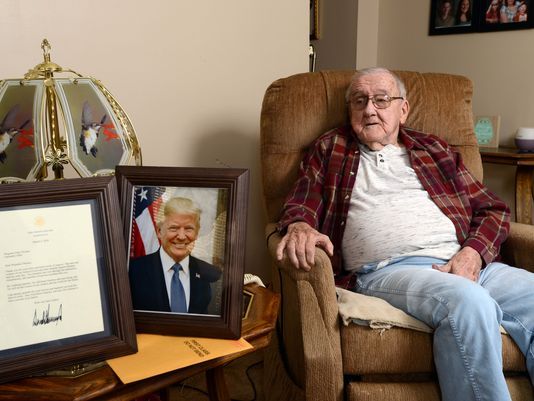 LANCASTER – It’s not every day someone receives a letter and photo from the President of the United States. But city resident and Air Force veteran John Thomas recently did.

About a year ago Thomas, 86, sent President Trump of photo himself in uniform, along with his granddaughter, Maygan Campbell, and her son, Clinton. Campbell is an Army veteran who served in Afghanistan and Germany.

“I just thought it was a good picture,” Thomas said.

Trump apparently did too, as he responded earlier this month by sending Thomas a letter and an 8 x 10 presidential photograph of himself. The gesture caught Thomas by surprise, as he said there was no way he expected Trump to write back. Thomas said he almost forgot he sent the letter.

The letter is dated March 2 and says in part, “The men and women of our Armed Forces and their families inspire Melania and me each day. Our freedom was won through the dedication, commitment, and sacrifice of service members like you.”

Thomas framed both the letter and the Trump picture and they are hanging on his living room wall.

“People are going to have to look at him when they come here,” he said.

Thomas’ other granddaughter, Ashley Conrad, was skeptical of the Trump letter and photo at first.

“Grandpa likes to exaggerate about things,” she said. “When he told me he got this in the mail I thought it was a post-card type of thing that was like junk mail. But it wasn’t junk mail. I think it’s pretty cool for him (Trump) to take time out to do that.”

Thomas said he’s a Trump supporter and had a campaign sign in his yard. He said Trump was the lesser of two evils when he ran against Hillary Clinton in 2016. Thomas said he plans to thank Trump for the letter and photo. He said he likes Trump because he supports the military.

Thomas served in the Air Force from 1951 to 1972. He finished up his military career by working with a refueling wing in Vietnam. He traveled all over the world, including 50 countries during his service career. He retired as a master sergeant.

Thomas is a former member of the Fairfield County Republican Party Central Committee. While serving the Air Force, he survived a 1956 crash landing in Canada. Thomas was an electrician on mid-air refueling planes during his military service.

After his military career, Thomas went on to become the Ohio Department of Transportation Department’s District 5 deputy director, a position he retired from in 1995. District 5 includes Fairfield County.