After yesterday’s Supreme Court ruling that Ohio’s law for removing inactive voters from the rolls is legal, Democrat candidate for Secretary of State Kathleen Clyde stated that she would not enforce the law if elected. 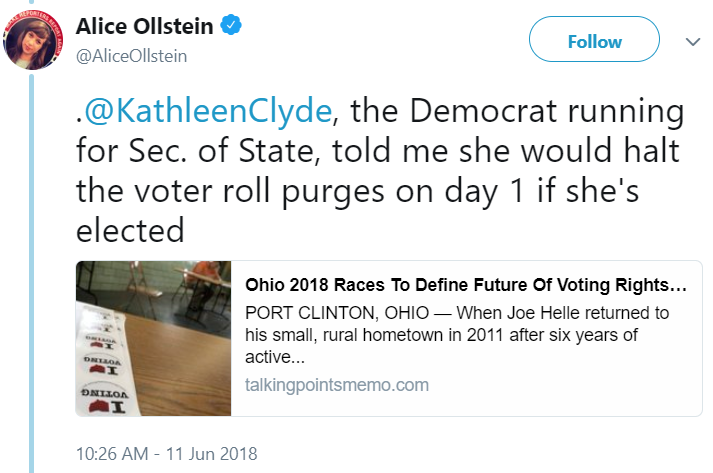 Clyde’s declaration that she would unilaterally halt Ohio’s process of maintaining clean voter rolls should send up red flags for voters. Not only would Clyde purposefully fail to uphold her oath of office if elected, she also would reverse more than 20 years of precedent set by both Republican and Democrat Secretaries of State. 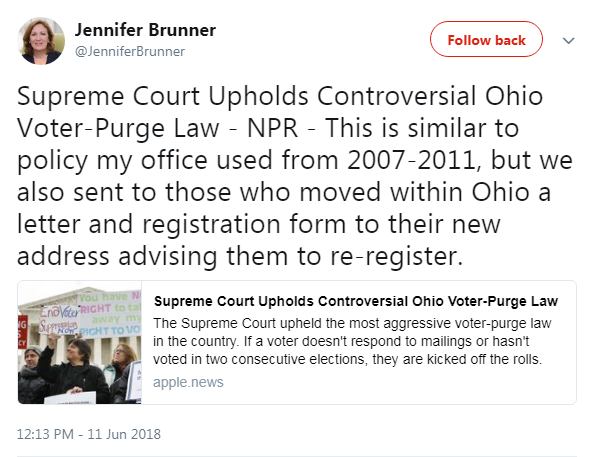 As reported by Cleveland.com, here is the process designated by Ohio law, that the Secretary of State follows to remove inactive voters from the rolls:

“The notice in question here warns recipients that unless they take the simple and easy step of mailing back the preaddressed, postage prepaid card — or take the equally easy step of updating their information online—their names may be removed from the voting rolls if they do not vote during the next four years.”

“It was Congress’s judgment that a reasonable person with an interest in voting is not likely to ignore notice of this sort.”

Frank LaRose, the Republican candidate for Secretary of State, understands the importance of maintaining clean voter rolls as well:

This November, Ohio voters have a choice between a candidate who has promised not to uphold their oath of office, and a candidate who will. The choice is clear; Frank LaRose is the right person to lead the Secretary of State’s office and ensure the integrity of Ohio’s elections.