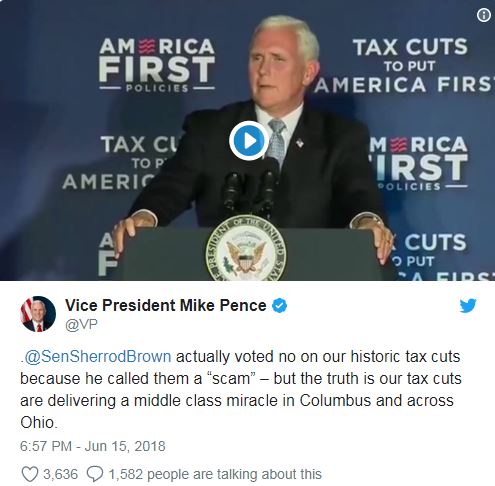 Vice President Pence went after Sen. Sherrod Brown (D-Ohio) and touted his Republican challenger during a speech in Ohio on Friday evening.

Speaking at an event in Columbus where the focus was on the GOP tax-cut plan signed in to law in December, Pence ripped Brown for calling the legislation a “scam” and joining with every Senate Democrat to oppose its passage.

“[The Democrats have] gone farther to the left than ever before. I mean, you need to only look at Ohio’s Sen. Sherrod Brown to prove it,” Pence told the audience.

“I mean, the hardworking men and women of Ohio deserve to know, when it came time to cut your taxes, Sen. Sherrod Brown voted no,” he continued.

“Sherrod Brown actually voted no because he called these historic tax cuts a ‘scam,’ ” Pence said. “The truth is, our tax cuts are delivering a middle-class miracle in Columbus and across Ohio. That’s the truth.”

“I met Jim back when he was a businessman trying to be a congressman. And I love to tell people, I was for Jim Renacci before it was cool,” Pence told the crowd to laughs.

“He’s a leader who’s been standing shoulder to shoulder with President Trump and our entire administration every day,” Pence added.”We couldn’t have gotten the tax cuts done without his insight, without his counsel and without his support.”