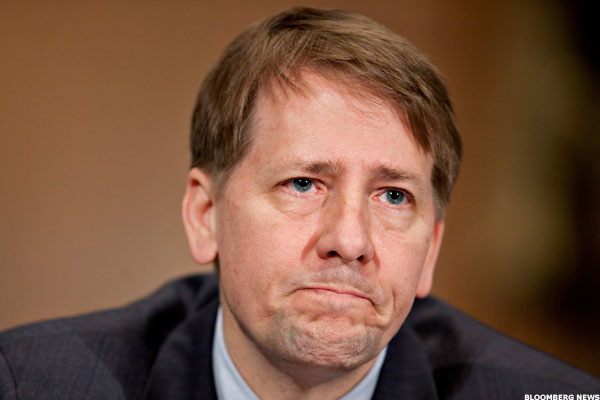 Ohio voters deserve to know more about Cordray, a liberal lawyer who for four years ran the federal Consumer Financial Protection Bureau (CFPB) under Presidents Obama and Trump. Even a cursory examination reveals Cordray to be more than just a self-promoting pit bull with vaguely monarchical tendencies. He is also a corrupt partisan hack.

Created in 2010 and launched in 2013, CFPB is a new kind of independent agency: highly centralized, without oversight by the usual bipartisan commission, and funded by Federal Reserve Bank profits and fines on corporations rather than congressional appropriations. The Dodd-Frank Act makes the agency’s director extremely powerful and basically un-fireable by the president. The idea is to liberate one “impartial” bureaucrat to courageously enforce “justice” in corporate America, unfettered by anything beyond his own sense of rightness.

As CFPB’s first director, Cordray proved neither impartial nor particularly motivated by justice. From the start, he exploited his unique power to the full, working to shape CFPB into a vehicle of immense power and publicity—for himself.  How shall we summarize this man’s record? Let facts be submitted to a candid world.

He staffed the newly created bureaucracy top-to-bottom with partisan Democrats. According to Federal Election Commission data, 100 percent of campaign contributions the agency’s employees made in 2016 went to Democratic candidates.

He funneled nearly $60 million to GMMB, a Democratic consulting firm with strong ties to the Obama and Hillary Clinton campaigns, for advertising and PR. Records show his agency spent at least $16 million a year in taxpayer money publicizing its director’s heroic deeds—a lavish amount even by Beltway standards.

He handed a lucrative loan-servicing monopoly to a Democratic crony, Donald Uderitz, a wealthy Florida hedge-fund operator. Under the terms of their sweetheart deal, Uderitz is entitled to collect millions in fees for servicing 800,000 private student loans and to “improve” debt collection from the four-in-ten borrowers behind in their payments. Uderitz has no experience as a servicer, but gets to start at the top—and pocket millions—thanks to his luck in having a very powerful friend in government.

Cordray unleashed his army of liberal attack-dog lawyers to harass private companies, many of them guilty of no crime beyond having a big bank account. He carried out a shakedown racket, euphemized as “governing by enforcement action.”

In a typical case, he would accuse a company (“target”) of vaguely worded offenses like “unfair” or “deceptive” practices, then threaten it with crippling fines or burdensome lawsuits unless it bowed to his demands, which of course included writing a big check to CFPB in an out-of-court settlement. As one disillusioned former agency attorney recalls, “Targets were almost certain to write a check.”

The size of the check did not depend on actual wrongdoing. “During investigations, Enforcement [Division] demanded targets’ financial statements to calculate the maximum fines they could afford to pay.”

In one widely reported case, Cordray filed a lawsuit against student-loan servicing giant Navient following four years of aggressive investigation. Yet, as one commenter summarizes, while “the company produced 450,000 pages of documents, hundreds of hours of phone recordings, and more than 30 written reports,” as of today “the bureau has yet to prove that Navient engaged in fraudulent conduct.”

And oh yes, he attempted to unlawfully appoint his own successor. In sum, the history of Richard Cordray at CFPB is one of repeated abuses of the public trust, to benefit himself and his cronies, and above all to promote himself for future office.

In late 2017, Cordray resigned suddenly to run for governor. President Trump rushed in a successor, both to shut down his last-minute self-replacement stunt and to clean out the stable. The designated stable-cleaner: Mick Mulvaney, former South Carolina congressman and current White House budget chief. Mick has his work cut out.

Muck-rake in hand, Mulvaney’s first major act as director was to deplore “the powers that I have as acting director. They would frighten most of you.” Next, he informed all agency staff: “The days of aggressively ‘pushing the envelope’ of the law in the name of the ‘mission’ are over.” Then, by early May, he was launching a partial reorganization of the rogue agency.

It’s a good start. But in this stable, much muck remains.

Mulvaney needs to do more. If he can’t shutter the agency, at least he can clean house. He should replace all of Cordray’s remaining political appointees, quash all of Cordray’s sweetheart deals, and fire all of Cordray’s cronies. Nay, more: he should suspend all new enforcement and rulemaking activities until the bureau is firmly under the president’s control and accountable to Congress, as the Constitution requires.

Meanwhile, back in Ohio, voters should ask themselves: What does “King Richard” Cordray’s track record portend for us? For corrupt political climbers with vaguely monarchical tendencies, the past is usually prologue.

Originally published in The Federalist