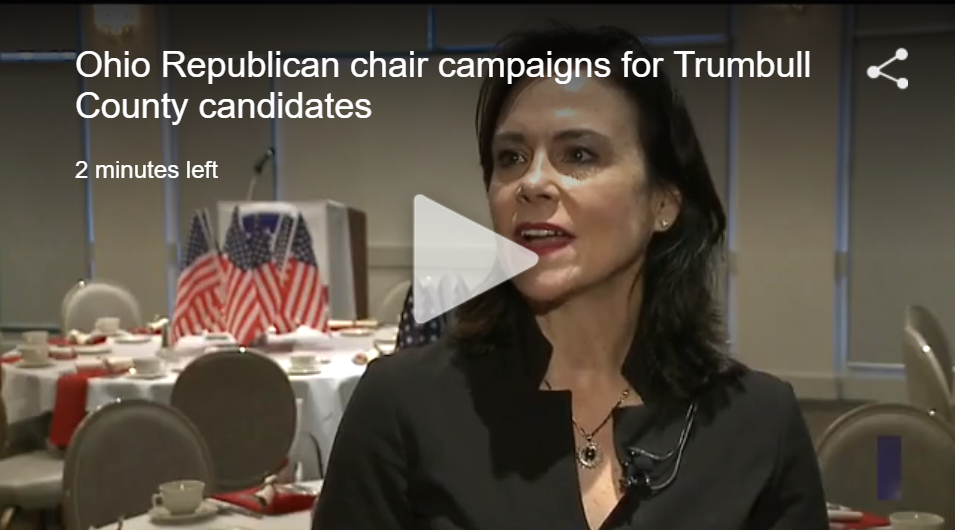 HOWLAND, Ohio (WKBN) – It was just over a year ago that Jane Timken became chair of the Ohio Republican Party — the first woman to hold the position. On Thursday night, she was in Howland, speaking in a predominantly Democratic county that voted for President Donald Trump.

“We’re going to be active in helping Trumbull County this year and beyond. That’s why I’m here to help their candidates,” she said.

The Cincinnati native went to Harvard and is married to Tim Timken, who runs TimkenSteel in Canton.

Now Timken is traveling Ohio, campaigning for Republicans. She has her eye on one of the Youngstown area’s congressional seats.

“I’d love to have Tim Ryan find some other line of work. We’ll see.”

“Seventeen of the 24 counties that voted for Sherrod Brown in 2012 went for Trump.”

She called Donald Trump an unconventional president who’s getting the job done. However, Timken gave no indication she would support Ohio’s top Republican — Governor John Kasich — who appears to already be campaigning for the 2020 presidential election.

“As it stands now, I’m a strong supporter of the president,” she said.

Timken said there needs to be more women in politics.

“I’m a woman, I’m the head of the Republican Party.”

In the Ohio House of Representatives, only 23 percent are women and in the Ohio Senate, it’s only 18 percent.

“I look at it as my job to try and be a role model. I always say you can’t be it if you don’t see it and women need to see more women in leadership roles,” Timken said.

Between Mahoning, Trumbull and Columbiana counties, there is only one Republican in either the Ohio House or Senate — Tim Ginter, of Salem. Both bodies are dominated by Republicans. Timken said that doesn’t help this area when decisions are made in Columbus.