It’s been two days since The Cincinnati Enquirer first reported on Richard Cordray’s offensive comments comparing Republicans to Nazi collaborators, but Cordray has refused to apologize, only claiming he “regrets” how his words were received.

Not a single Democrat candidate has spoken out against Cordray either. Does Sherrod Brown agree with this dangerous rhetoric? How about Steve Dettelbach, Kathleen Clyde, Zack Space or Rob Richardson?

Is the Ohio Democratic Party content with its candidate for Governor equating the atrocities of the Nazis to a difference in opinion on policy decisions? 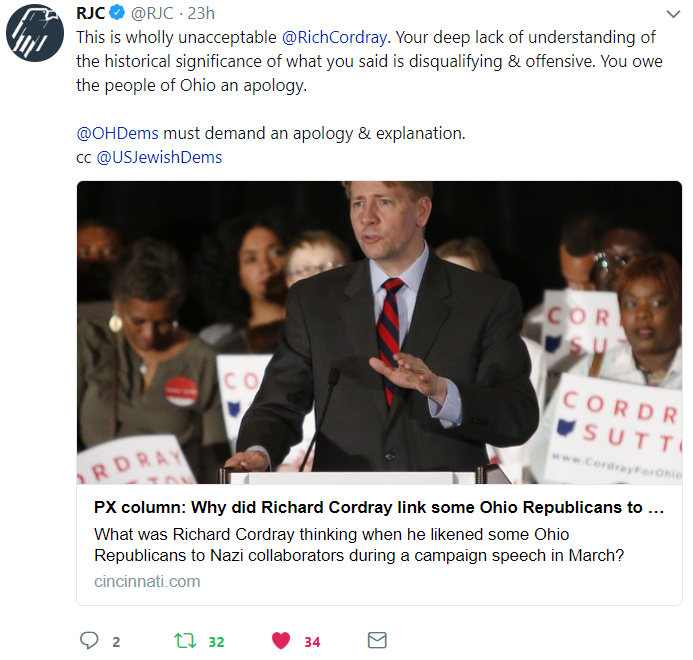 The escalation of anti-Republican rhetoric from Democrats like Maxine Waters has already led to nasty confrontations across the country. Florida Attorney General Pam Bondi had to receive a police escort to leave a theatre. White House Press Secretary Sarah Huckabee Sanders is now receiving Secret Service protection after threats were made against her family. Homeland Security Secretary Kirstjen Nielsen was shouted out of a restaurant. On Monday, Senate Majority Leader Mitch McConnell and his wife Transportation Secretary Elaine Chao were confronted by group men who were held back by security.

Do Ohio Democrats support these types of confrontations? How far are they willing to go?

Richard Cordray’s irresponsible comments have the potential to cause more nasty confrontations here in Ohio. He must apologize, and Ohio Democrats must be better.

PX column: Why did Richard Cordray link some Ohio Republicans to Nazi collaborators?